NorthShore Marina, located at 6612 Lantern View Drive in the City of Jonestown, is comprised of a true deep water floating marina, containing 328 covered boat slips with electricity, WIFI, and fresh water supply. A ship store with four gasoline pumps, and three wave attenuators is located on the east side of the marina with 2 restrooms. In addition, the marina offers an office with kitchen and flat screen TV, a covered common area with a barbeque pit, flat screen TV and lounge chairs, two air-conditioned restrooms and a private shower. The marina is located over 120 feet of water, making the marina accessible during all water levels of Lake Travis which fluctuates constantly. Northshore Marina has won the Texas Marina of the Year title 5 times since 2009 and in 2001 became the first marina on Lake Travis to win the National Marina of the Year title. Northshore has  become the most decorated marina on the lake and you’ll be sure to see why the moment you step foot on the facility.

Ranked as one of the cleanest lakes in Texas and in the top three for scuba and water sports, Lake Travis is 65 miles of shimmering water and beautiful, natural limestone cliffs. With coves east, north and west of the marina, this boater’s dream offers thrilling exploration and adventure with casual dining options all along the shoreline.

Lake Travis and its parks offer amazing and diverse beauty — from lakes and hills to rivers and prairies – all within close proximity. Parks surrounding Lake Travis foster a sense of belonging for the families and visitors who frequent them. Managed to balance recreational use with resource protection, the parks prioritize water quality and habitat protection and provide infrastructure, facilities and necessary amenities to facilitate recreational activities. The parks are comfortable, safe places, environmentally friendly and models of sustainability which are readily associated with a positive, strong sense of place. The attractiveness of these nature escapes continues to draw families from Dallas, Houston and the state of Texas.

Lake Travis is located fifteen miles northwest of downtown Austin, Texas. The lake is 65 miles long, and its maximum width is 4.5 miles. Lake Travis covers 18,900 acres. The lake is considered full at an elevation of 681 feet above mean sea level. There are 270 miles of shoreline around the lake. Lake Travis is one of six lakes in the Highland Lakes chain of lakes operated by the Lower Colorado River Authority. The lake has a maximum depth of 210 feet. 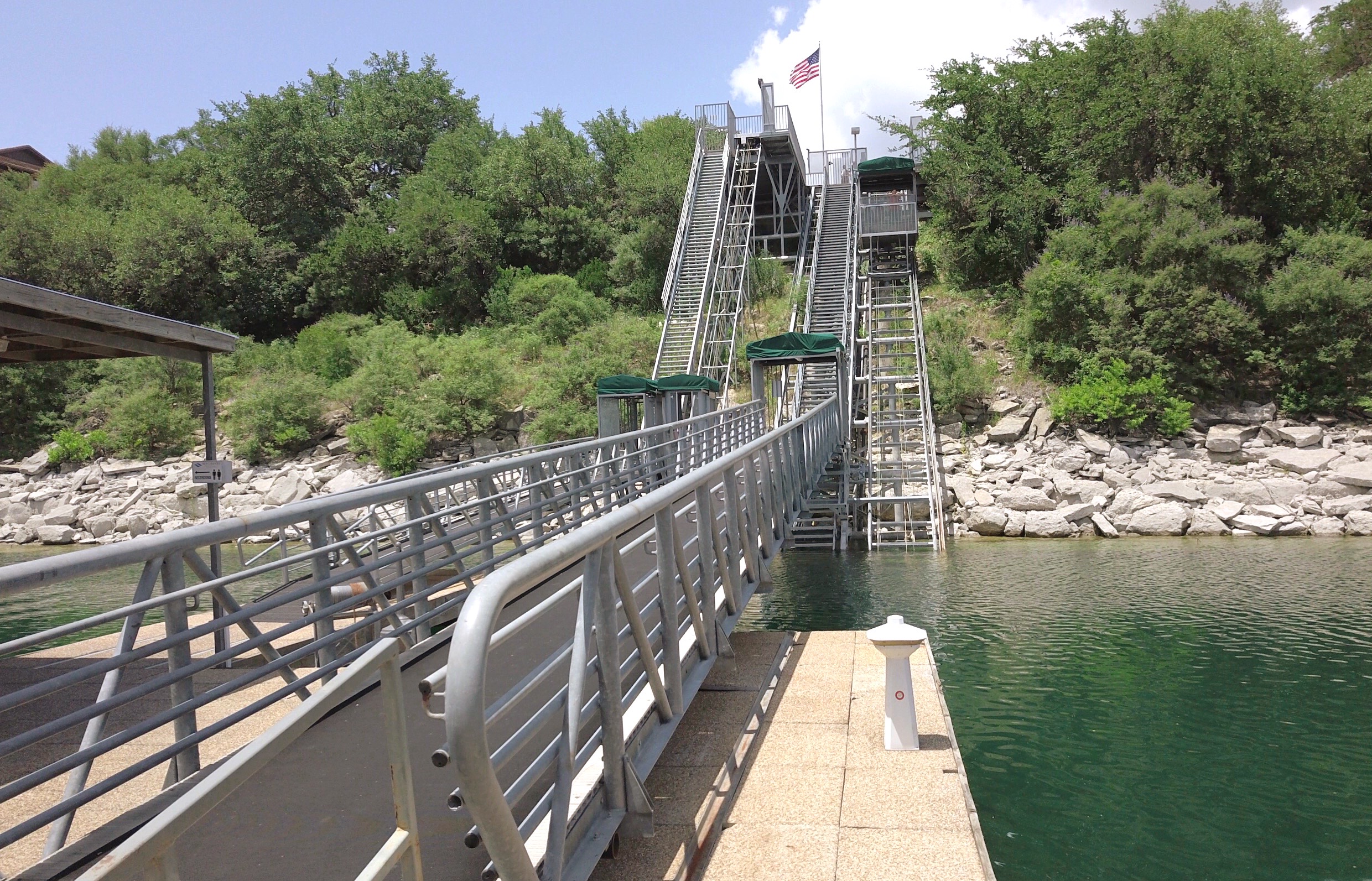 Lake Travis was created by impounding the Colorado River with the construction of Mansfield Dam in 1937 – 1941. The dam spillway elevation is 714 feet above msl. The dam has 24 floodgates rated at 4,770 cubic feet per second each.

The Hollows is the definitive waterfront community in the Austin area. Located between Big Devil’s Hollow and Sandy Creek along the north shore of Lake Travis, The Hollows has over four miles of shoreline and the most stunning lakefront and hilltop vistas on the water. With over 1400 acres, the community will preserve 250 acres of open spaces, parklands and greenways, making The Hollows a natural sanctuary. The Hollows offers Estate Homes and Lots, Casitas, Cottages, and Hilltop and Marina Villa Condominiums. Unlike many other lakeside communities, The Hollows offers underground utilities, including sanitary sewer service. The extensive amenities in The Hollows include the Beach Club, Long Hollow Kayak Club, Exercise/ Fitness room, NorthShore Marina, boat ramp, Flagship Park, Admirals Park, extensive trails, and Hilltop Smokehouse and Overlook. The Hollows is located in Jonestown and Lago Vista, Texas, and is served by the Lago Vista Independent School District. While Northshore Marina is located within The Hollows, you do not have to own property in the community to have a boat slip here.

The City of Jonestown is located on FM 1431 in northern Travis County, Texas, approximately 20 miles northwest of the City of Austin, and nine miles west of the intersection of U.S. 183 and FM 1431, in the heart of one of the fastest growing population areas in Texas. Often referred to as the “Gateway to the Hill Country”, the City of Jonestown offers the amenities of a country lifestyle, combined with a location convenient to Austin.

Jonestown has existed as a populated rural community since it was originally settled by the Jones brothers, Emmett and Warren, in the late 1930’s. When Mansfield Dam was increased in height, and Lake Travis was filled, the development of Jonestown as a lake resort became possible. Begun first as a haven for weekend fishermen and boaters, more and more people built their permanent residence here and commuted to work in Austin. A few fishing cabins still remain, but large, new homes are being built on estate lots in gated communities, many with lake-front or lake views.</s[an>

The City of Jonestown is committed to responsible planned development, economic vitality, a program for public service improvements, and continued park expansions, as well as improving the quality of life for its residents.

LCRA is a conservation and reclamation district created by the Texas Legislature in 1934. It has no taxing authority and operates solely on utility revenues and fees generated from supplying energy, water and community services. LCRA supplies low-cost electricity for Central Texas, manages water supplies and floods in the lower Colorado River basin, develops water and wastewater utilities, provides public parks, and supports community and economic development in 58 Texas counties.